Higher Goals: 26 Years in the Making…

In 1988, Wayne and Andre met while residing in the same housing projects in Hopkinsville, KY. As 3rd graders, they were introduced to organized basketball through a local youth league where they became teammates, winning multiple city and regional league championships through 6th Grade. They followed up their grade school success with a very solid middle and high school campaign becoming a dynamic backcourt duo at University Heights Academy, a prestigious private school in Kentucky which has produced dozens of NCAA Division 1 players including Greg Buckner – Clemson, Harold Swanagan – Notre Dame, Ravi Moss – University of Kentucky, Lamont Barnes – Temple, Isaiah Victor and Scotty Hopson – Tennessee, and many more.

Wayne and Andre shared the backcourt through back to back high school single A State Championships their junior and senior seasons. Andre, known for his defensive tenacity and floor leadership, went on to earn a full athletic scholarship to Duke University through a miraculous turn of events. Wayne, a steady handed shooter and offensive creator on the court, had equal talent in the classroom. As salutatorian, he turned down a Junior College athletic scholarship to accept a full academic scholarship to the University of North Carolina – Chapel Hill.

After 10 years of friendship, championships, shared joy and pain, these two gentlemen were struck with the blessing, or burden, of maintaining a close relationship while being torn between one of the most heated sports rivalries in the country. Upon arrival to college, both had serious work to do jockeying for athletic and academic stability in two very prolific programs. Wayne spent a few years starting for Chapel Hills’s JV team. All said and done, no matter how insurmountable their workloads seemed, no matter how testy things got between the two campuses during rivalry week, their bond was never challenged. They were regulars on both schools’ campuses and still to this day, share dozens of mutual friends at both schools across a wide spectrum of professions. 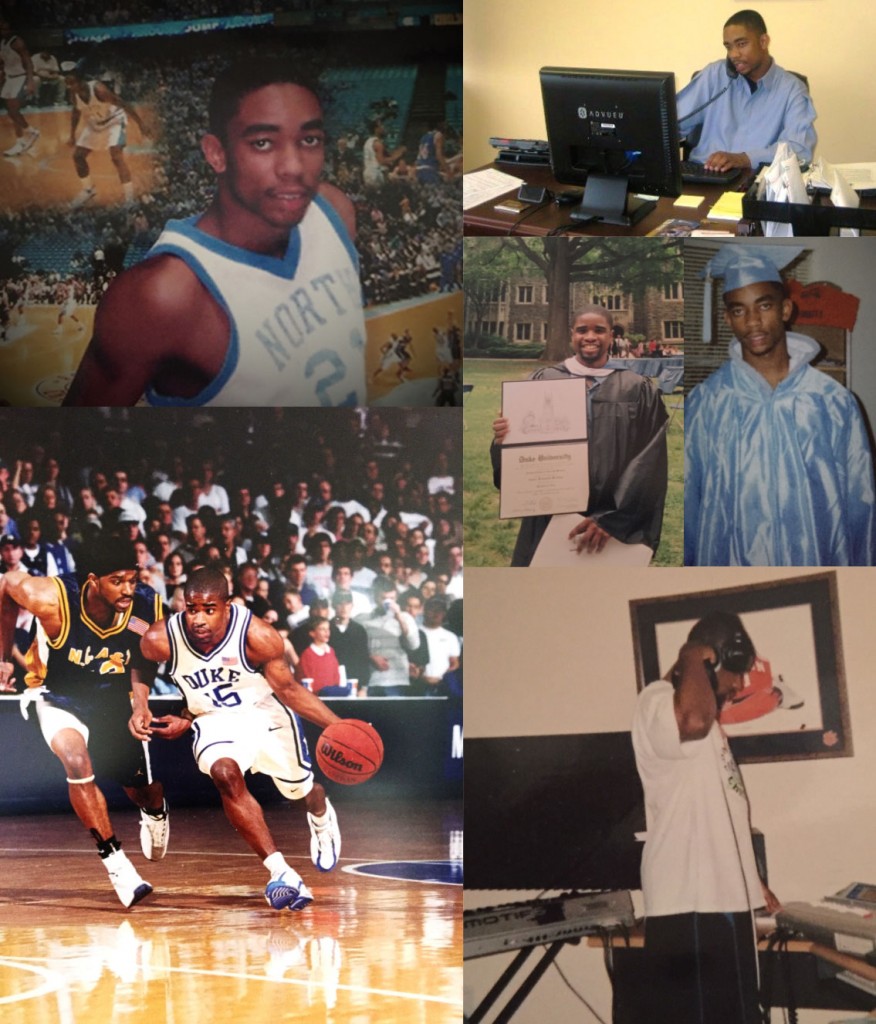 After graduating from their Universities in 2003, they took on separate career paths. Wayne took a job in sales with the Atlanta Hawks. Andre moved back to Hopkinsville to start a recording studio and entertainment company. 2 years later, they accepted an opportunity to move to Denver, CO to head up Greg Buckner’s (Andre’s brother) academic merit based non-profit foundation. Upon signing a free agent contract with the Mavericks (who drafted him in ’98) Greg Buckner moved his Foundation to Dallas in the Summer of 2006. During two years of operations in Denver and Dallas, the Greg Buckner Foundation, led by Wayne and Andre, had great success through events and programs including: raising over $50K for Hurricane Katrina victims, raising $40K via celebrity bowling bash and GALA, honoring and rewarding over 150 students in the Dallas and Denver Metro, earning Greg the NBA community assist award in 2007, orchestrating basketball camps in Colorado, Kentucky, South Carolina, and more.

In the Fall of 2007, Greg Buckner was traded to Minnesota, and the foundation elected not to undergo yet another move to a new city. The company ceased operations just months later. This ultimately spelled several months of unemployment and financial turmoil for both Wayne and Andre. Although both decided to stay in the Dallas area, they again took separate business paths. Wayne founded an events company (515 Watts), which facilitated fundraising events for non-profit programs, Josh Howard and Jason Terry are two notable clients. Andre again turned to the entertainment industry, this time in the area of writing and film production. Andre wrote several movies, screenplays, and commercials. Despite the troubled times, most of his writings were comic and satire in nature. He produced a few small, low-budget projects during the culmination of the YOUTUBE era, but views his work as nothing more than a hobby, not a career.

In 2008, Andre and Wayne also spent time running camps/clinics for Josh Howard, and after nearly a year of financial and career instability, a blessing came. Jay Williams, a former teammate of Andre’s at Duke, contacted Andre and informed him of an opportunity with 24hour Fitness.  Jay, at the time, was an ambassador for a youth basketball initiative started by 24 Hour Fitness called Hoopology, founded and orchestrated in San Ramon, CA. Hoopology was looking to expand their operations across the country, starting with the Dallas area. Through Jay, Andre was an immediate frontrunner for heading the Dallas market. After a pretty lengthy application and interview process, Andre ultimately accepted the position, and immediately hired Wayne as his partner. Even now, they both view this as the most critical blessing in their lives given it came at one of the lowest points of their life.

Hoopology was initially assigned to Southlake and shortly after expanded to Keller. However, just as the American economy began to sink, the actual business of Hoopology, outside of the headquarters in California, never quite took off as anticipated. Despite extensive marketing efforts and company-wide promotion, the program continued to fall short of projections and ultimately faced termination. Just 8 months after their big blessing, Wayne and Andre found themselves sitting in the HR office and given a choice: a relatively modest severance package or a contract to operate a basketball program at 24 Hour Fitness independently.

With just 72 Hours to make a decision, they both contemplated accepting the severance and moving on, which at the time made the most sense. Operating an independent program at 24 Hour Fitness defied logic, particularly given they had already failed as an in-house program. However, it was this basic notion that made their decision for them. In their minds, accepting severance meant declining a challenge, which is something they had never done as a team. Since 8 years old, they were at their best when faced with challenges that defy logic: winning a State Title with a 5’11 starting center, living in poverty with negative influences around, yet managing to perform at a high level academically and athletically, and finding their way to a free college education. 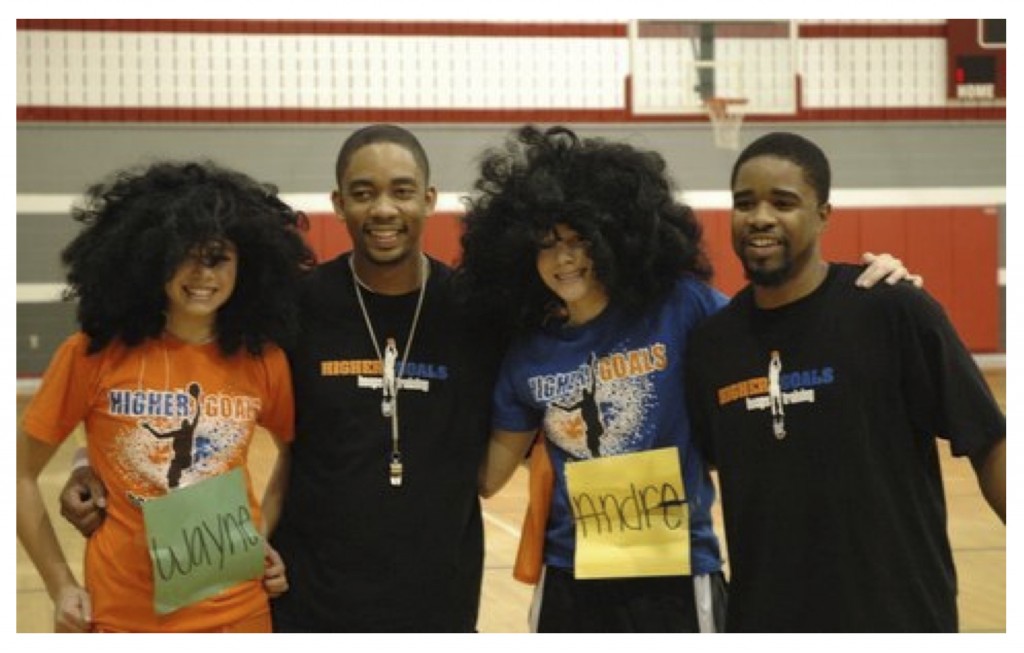 Still managing the shock of losing their jobs and the fear of staring over, they got right to work. Andre coined the term Higher Goals, which came to him in a dream he had after falling asleep brainstorming. The words “Higher Goals” would resonate with them because it symbolizes their deep-rooted determination to outdo their previous endeavors.

With barely enough cash to pay next month’s bills, they leveraged a few business relationships earned through their time with the Foundation and Hoopology, and got a website and a few business essentials. Within days, they began improvising their way through business. They had no vision, no plan, and no working capital. All they had was faith and one another, which was all they needed, for this was a business they’d been running since 1988…